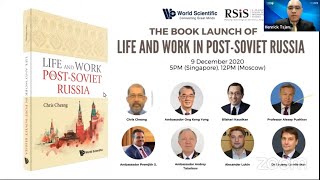 Life and Work in Post-Soviet Russia revolves around the professional and personal experience of living and working in Moscow of a Singapore diplomat, beginning in the aftermath of the USSR’s collapse and ending in the first decade-and-a-half of this century. The book seeks to provide readers with glimpses of life in Moscow and Russia in the mid-1990s, as well as in the early years of this century. It deals with not only the sociopolitical and economic challenges of Russia’s post-Soviet leaders, but also those facing the man-in-the-street. That the man-in-the-street had to personally bear the brunt of the momentous changes in post-Soviet Russia’s rush to reforms is made plain in the book, and not so much the trials and tribulations of his leaders. Life and Work in Post-Soviet Russia also looks to broaden the outlook of Singaporeans, in the first instance, and non-Russians, in general, about Russia, a country which has been portrayed in a negative light by most of the Anglo-Saxon and Western media. This book also gives readers some insight into Singapore’s relations with Russia, deals with issues from a personal standpoint without any attempt to inject political science theories into its analyses, and concludes with some thoughts on its future role in the world.