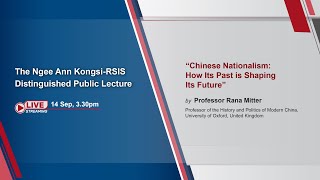 Nationalism has become a common explanation of the ideology behind the rise of China.   But too often the phrase is used to describe a wide range of phenomena that range from pride in the nation-state to anti-foreign xenophobia.  This lecture will show that the origins of Chinese nationalism lie in a range of different strands of thought.  One important element is the experience of modern warfare, from the humiliations of the Opium Wars to the horrors but eventual victory in World War II.  Another is the rediscovery of traditional Chinese philosophy, with the thinking of Confucius particularly important in China’s reinvention of itself.  Also crucial, but underexamined, is the rethinking of China’s Marxist tradition, which has been nationalist as much as it has been radical.  By examining these strands from China’s past that shape nationalist thinking in China, we can understand the phenomena that shape China’s contemporary nationalism.  These include a new sense that China should play a powerful role in the world, the desire to create a powerful party-state-based identity at home which accepts no opposition, and the combination of ideas of a glorious past with a technologically-driven, highly modern future.  Only by understanding China’s past can we interpret its nationalist future.