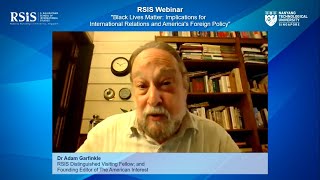 The reaction to the May 25 killing of George Floyd by a white police officer in Minneapolis touched off immediate and widespread, and some continuing protest in the United States, and spilled over as well in various kinetic and non-kinetic forms to other countries.  The actual sources and subsequent perceptions of the protests – including the role of the Black Lives Matter organization – have themselves become contentiously divisive in the United States amid an already polarised political and cultural environment, and during an election year to boot.  The sum of the complexities is that they magnify the inward turning of elite and mass American opinion alike away from foreign policy concerns, and provide ammunition for some to tarnish – unfairly and often hypocritically – the image of the United States abroad.