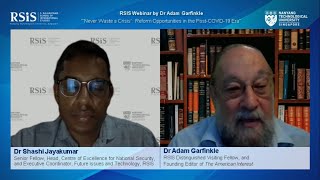 The COVID-19 crisis may be analogised as a stress test for human social and political institutions at all levels of society. Some of these institutions have been found wanting, though perfect agreement on which ones and why remains elusive within societies as well as among them.

That said, many proposals exist and more will follow as to how the US Government should reform itself to prepare for future pandemics. Those reforms could spill benignly over the government as a whole, and global governance protocols could be improved as a result of US initiatives.

With respect to international institutions, not a single international organisation has distinguished itself as even moderately useful in this crisis. At the same time, everyone knows that pandemic disease contingencies cannot be managed on a national level alone — and the same is true for other global governance challenges. So, in due course, national governments will try again to come to some practical arrangements to deal with a range of issues. They can succeed if they are practical, and if the locus of decision-making is more democratically distributed.

That, however, will require Western countries to make a sincere effort to integrate non-Western civilisational zones into reformed international organisations, and it will particularly require the Chinese government to make a critical choice:  to continue free riding on the global institutional set-up with its own unilateral advantage ultimately in mind, or to become a genuine good neighbour to other societies.