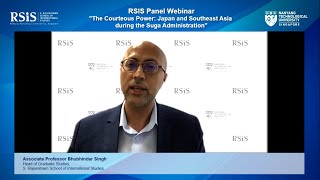 When Yoshidide Suga recently took over as prime minister of Japan, he tellingly focused his first trip abroad on Southeast Asia. The region has long been crucial to Japan’s foreign policy, and Japan has long been a key external partner to ASEAN and its constitutive states and societies. Japan’s engagement in Southeast Asia has become even more important in the era of the “Free and Open Indo-Pacific,” as the region confronts new economic, political and security challenges against the backdrop of waxing Sino-American rivalry and now a global pandemic. This webinar will examine Japan’s role in Southeast Asia in the recent past and the going forward. Drawing on the findings of a collaborative research project involving scholars from Southeast Asia, Japan, and North America, John Ciorciari and Kiyo Tsutsui will highlight Japan’s engagement in key areas such as infrastructure investment, maritime security assistance, and multilateral diplomacy, as well as Southeast Asian responses to its initiatives. They will also discuss the important roles played by non-state actors in mediating Japanese ties to Southeast Asia, and they will review key elements of continuity and change likely to extend into the Suga administration and beyond.