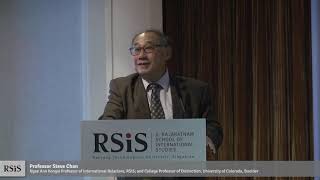 “Thucydides’s Trap” claims that the danger of war increases when a “rising state” approaches or overtakes a “ruling state’s” power. It offers the Peloponnesian War between Athens and Sparta some 2,500 years ago as an analogy for understanding the cause behind rising tension between contemporary China and the U.S. How helpful is this analogy and its monocausal explanation of war? How strong is this explanation’s validity such as with respect to its designation of “rising” and “ruling” states, and its selection and interpretation of past instances of interstate power shift and war? Thucydides’s own account tells us that there are multiple, concurrent pathways to war. Human agency, especially people’s capacity to learn from the past, should be considered in addition to structural constraints. Interstate power shifts are neither necessary nor sufficient for war to occur; they represent just one of several factors creating a combination that endangers peace. In addressing contemporary Sino-American relations, we should consider how other variables such as timing, location, alliance commitments, and racial identity can mitigate or exacerbate the influence of power shifts on war occurrence.