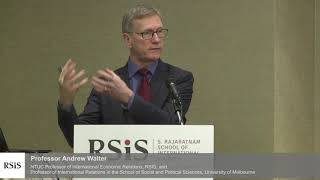 In this lecture, Professor Andrew Walter will explore how rising financial fragility and the wealth shocks associated with major financial crises have contributed to the rise of political populism in many countries. He argues these developments have had ongoing consequences for domestic politics, international relations and global economic stability. In many advanced and emerging countries subject to these shocks, dissatisfaction with mainstream politics has been rising sharply. This has threatened longstanding rules and norms of domestic and international politics, as well as prospects for peace and prosperity in Asia and beyond.

The lecture considers common explanations for these developments, including cultural backlash and rising income inequality. The role of wealth shocks and inequality warrant more attention than they have received. Households in many emerging and high income countries have become increasingly dependent on risky housing and pension wealth for access to key goods including education, healthcare and retirement services. The rising cost and limits on access to these goods have “squeezed” many households, producing growing anxiety, perceptions of rising competition for scarce resources, and sometimes threats to their social status and identity. Many see mainstream politics as having done little to address these concerns and often as exacerbating them. Populist politicians have seized on this political opportunity and produced new challenges to the domestic and international policy establishment. The lecture will also consider what, if anything, can be done to address these challenges.

The lecture develops themes addressed in Professor Walter’s new book, The Wealth Effect: How the Great Expectations of the Middle Class Have Changed the Politics of Banking Crises (Cambridge University Press, 2019), written with Professor Jeffrey Chwieroth of the London School of Economics and Political Science. This book was recently recommended by Martin Wolf of the Financial Times (London) as a best read in economics, Summer 2019. It uses extensive historical and contemporary evidence to demonstrate that the politics of major banking crises have been transformed by the “wealth effect”: rising middle class wealth has generated “great expectations” regarding government responsibilities for the protection of this wealth. It shows that crisis policy interventions have become more extensive and costly – and their political aftermaths far more fraught – because of democratic governance, not in spite of it. Using data from a large number of democracies over two centuries, and detailed historical studies of Brazil, the United Kingdom and the United States, the book breaks new ground in exploring the consequences of the emergence of mass political demand for financial stabilisation.