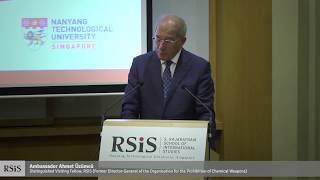 There have been several attempts to ban the use of chemical weapons (CWs). However, it took almost a century to reach a global ban on these weapons. The Chemical Weapons Convention (CWC) which entered into force in 1997 prohibited the production, stockpiling and use of CWs, under the verification of the Organization for the Prohibition of CWs(OPCW).

The implementation of the CWC over the past twenty-two years has been successful. 193 countries joined the OPCW. 97% of declared stockpiles declared by eight member states, including Syria, have so far been destroyed under the verification the OPCW. The remaining stocks in the United States will be eliminated by 2023. In view of this progress the member countries have decided to focus more on the prevention of the reemergence of CWs.

In spite of this multilateralist success which is also recognized by the Nobel Peace Prize in 2013, CWs were used in Syria, Iraq, Malaysia and the United Kingdom over the past six years. These incidents led the international community to consider different measures to deter further uses of CWs and to strengthen the international norm against such weapons. The erosion of the taboo against CWs would undermine one of the important pillars of the international order. This should be prevented.

However, there are political challenges. The OPCW membership is divided. States Parties supporting the Syrian Government are questioning the impartiality and the credibility of mechanisms established to investigate CW attacks in Syria. The UN Security Council could not agree on resolutions based on reports by investigative mechanisms. This situation prevents the international community from taking effective measures mitigating the risks for our security. It is imperative to overcome these problems for the well being, security and prosperity of our peoples.