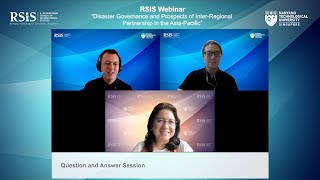 The Southwest Pacific is considered one of the most vulnerable regions in the world to natural hazards. Five of the Pacific Island States (PIS) rank among the top 20 most-at risk countries in the World Risk Index, with Vanuatu and Tonga ranking first and second respectively. The Southwest Pacific neighbours Southeast Asia and both regions are exposed to a variety of natural hazards, resulting in significant damage and loss of lives annually. Similar exposure to climate-induced hazards raises the potential to create a coalition of affected states from the Asia-Pacific to share knowledge of disaster governance in areas where niche capabilities have been developed and shape the global debate on the effects of natural hazards and climate-induced disasters.