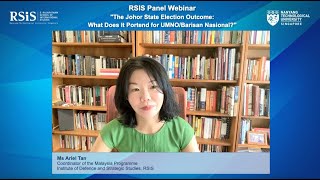 Johor, whose economy has been severely affected by the two-year COVID-19 pandemic and border closure with Singapore, will be holding its state election on 12 March 2022. This was triggered by key UMNO leaders who argue that its ruling coalition’s single-seat majority is untenable. They claim that Johor needs a more stable and robust government via a greater control of the state assembly by UMNO/Barisan Nasional. They point to UMNO’s recent winning streaks in Sabah and Melaka state elections as the latest signs of support returning to UMNO. If UMNO delivers a strong showing in Johor, they would likely press for an early General Election (GE) so that UMNO will be returned to form a stronger federal government

UMNO has sought to recover its domination of Malaysia’s political landscape after its defeat in the 2018 GE. Its key leaders were instrumental in the collapse of the Pakatan Harapan and Perikatan Nasional governments in the last two years. They skilfully leveraged the weaknesses of the Opposition and Bersatu. However, it is unclear if UMNO and its coalition, Barisan Nasional, have overcome their own weaknesses that had led to the 2018 rout, and what partnerships they would need to build to regain full control of the federal government after the next GE.

This webinar will discuss: