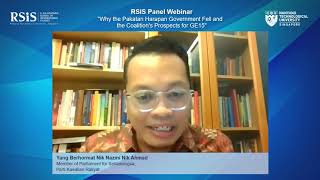 The Pakatan Harapan (PH) government led by Dr Mahathir Mohamad fell in February 2020, 22 months after coming into power, and was succeeded by the Perikatan Nasional government led by Prime Minister (PM) Muhyiddin Yassin.  The key players, their supporters, and observers have put forth their views on why and how PH fell. These narratives are shaping perspectives on the two coalitions’ prospects in the next General Elections (GE15), which is said to be likely called as early as the first half of 2021 although PM Muhyiddin has the option of seeking to serve out the full term of the 14th parliament, which ends in July 2023.

Mr Nik Nazmi will provide the PKR perspective on why PH fell, and the coalition’s prospects for GE15.  He will address the key reasons cited by other parties, such as that there was no support within in PH for Mr Anwar Ibrahim to succeed Dr Mahathir and that the PH government did not have sufficient Malay support.  He will highlight the strengths and relevance of PH for Malaysians and their aspirations for a united and prosperous nation.

Mr Jahabar Sadiq, a prominent and well-respected editor and journalist, will provide his views on the historic events of the last two years, and their trajectory towards the next GE and beyond.  He is an astute and passionate observer of developments in Malaysia.  He also has deep ties with political leaders from all sides and would also be able to present and analyse their positions and motivations.

This webinar promises to be a fascinating and elucidating discussion on current issues and upcoming developments in Malaysia.