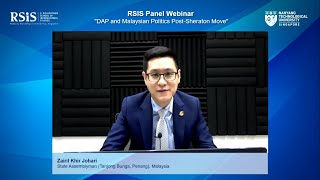 After its 22-month stint in the Pakatan Harapan government, the Democratic Action Party (DAP) is back on the opposition bench. The Pakatan Harapan’s reformist and multiracial project appears moribund. With the ongoing political realignment and socioeconomic challenges facing Malaysia, exacerbated by COVID-19, where is the DAP’s place under the Malaysian sun?

The DAP is expected to elect a new Secretary-General at the Central Executive Committee election on 20 June 2021, who will lead the party into the next general election. Since the Sheraton Move in February 2020, DAP’s relationship with its closest coalition partner Parti Keadilan Rakyat (PKR) and PKR President Anwar Ibrahim has apparently deteriorated. Meanwhile, DAP leaders have not fully closed the door on cooperation with the United Malays National Organisation (UMNO) after the next general election.

The DAP is the biggest party in Parliament, holding a solid 42-seat bloc out of the 222 total. Yet, the more the DAP succeeds politically, the more susceptible it has been to its detractors’ allegation that it is a threat to the Malay majority’s interests. It thus has to continue to walk the tightrope between retaining its largely Chinese and urban support base, and cultivating and reassuring the Malay majority.

Speakers at this Webinar will address the following issues and more: