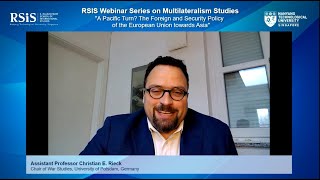 This webinar argued that the EU is witnessing a “Pacific Turn” in its foreign and security policy, but not a “pivot to Asia”. This turn is driven by both the European Commission and its Member States, albeit with distinct foci on different instruments of foreign and security policy. This should lead to a relatively coherent policy towards the different sub-regions of Asia. As in other world regions, however, the EU will leverage and enhance member state assets and instruments, but without being able to fundamentally alter its character as a fractured foreign policy actor.
On the other hand, the EU is not without power by giving a general introduction to EU foreign policy, its Global Strategy, the EU institutions involved, the relevant modes of governance, as well as its defining characteristic: the relationship between supranational institutions and member states. While EU foreign policy is soft power oriented, European Security and Defence Policy is conceptionally different in its hard power orientation. The webinar presented relevant new institutions and structures, as well as the Comprehensive Defence Package of 2017. Both policies have their specific strengths and weaknesses, as recent developments in Asia will illustrate.
In other words, we will see more “Europe” in Asia but this will not entail more “European power”.
Full details: https://www.rsis.edu.sg/event/rsis-webinar-series-on-multilateralism-studies