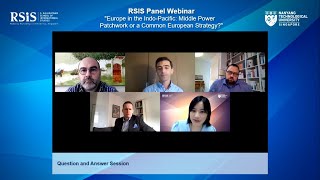 Because of the increasingly important strategic interconnection of the Western Pacific and the Indian Ocean, the geostrategic concept of the Indo-Pacific is rapidly gaining traction. Important resident powers such as Japan, the United States and Australia have embraced the Indo-Pacific and released national strategic visions. European nations play a less critical role in the region and Europe has mostly remained at the sidelines of the Indo-Pacific debate. However, in the light of their strong economic interests in the region and interdependence with regional economies, the European Union’s (EU) member states may feel compelled to formulate national strategies, accounting for a changed strategic environment; perhaps this may even lead to a common EU/European approach.

Thus far, France and Germany are the only two European nations to publish a national Indo-Pacific strategy. This RSIS webinar will introduce and discuss the respective German and French strategies, their rationale, opportunities and limitations. The webinar will also discuss whether the two existing white papers can translate into a Franco-German push to drive a common EU Indo-Pacific strategy.  A specific EU perspective will be discussed, too, including the possibility to frame this within the Common Security and Defence Policy (CSDP). Last but not least, although no longer a member state, it seems unlikely that any European Indo-Pacific cooperation can be meaningful without British participation. And although the United Kingdom has not released an official Indo-Pacific strategy of its own, Britain shares other European nations’ economic interest in the region. Moreover, more than any other European nation, the UK maintains close historical ties to the region and can build on strong existing diplomatic and defence networks.

The topics to be discussed are: