China and the Middle East: Venturing into the Maelstrom 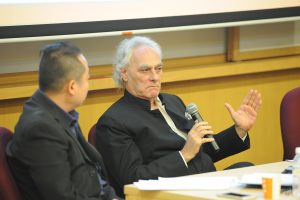 Dr James M. Dorsey, Senior Fellow at the S. Rajaratnam School of International Studies (RSIS), spoke about his new book, “China and the Middle East: Venturing into the Maelstrom,” during its launch at [email protected] on 20 September 2018. The book launch was opened by Amb Ong Keng Yong, RSIS Executive Deputy Chairman, and also featured a book review by Assistant Professor Hoo Tiang Boon.

Dr Dorsey’s book focuses on the complex relationship between China and the Middle East, and discusses the roles played by other extra-regional powers such as the United States.

At the book launch, Dr Dorsey spoke about how instability in the Middle East could affect China, in particular how the development of incidents like the Arab revolt and ISIS attacks could threaten China’s national security, especially in the Xinjiang region. While insistent on non-interference with respect to the domestic affairs of other countries in the past, China finds it challenging to stand its ground on this policy. China used to focus on its commercial relationships in the Middle East in order to protect its security and economic interests. However, instability in the Middle East and the activities of ISIS in recent years has impacted how China defines its interests in that region.

Dr Dorsey highlighted several causes for the rise of anti-Chinese sentiments in the Middle East, with China’s Belt and Road Initiative (BRI) being a major factor. China’s increasing military presence in the region, as well as its trading policies and practices in the BRI, has proven to be far from popular in the Middle East. The anti-Chinese sentiment is also further aggravated due to the perceived suppression of Muslim people in the Xinjiang region by the Chinese government. To maintain the BRI’s development, Dr Dorsey suggested that China must help Middle Eastern governments’ to stabilise their countries. He also noted the difficulty in predicting how potential obstacles to the BRI could play out in the future.