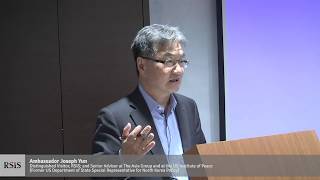 Hostility between the United States and the Democratic People’s Republic of Korea (DPRK) has been the central security challenge of Northeast Asia for the past seventy-five years. Over the past several decades, while the tensions between the US and DPRK have spiked up and down, the fundamental premise of the Washington-Pyongyang relations remains the same. That is, how much nuclear capacity should North Korea give up for how much normalisation of relations with the United States and the rest of the world. The basic elements of the several deals—from the Agreed Framework in 1994 to the six-party talks agreement in 2005 to the deal discussed in Singapore two years ago, when Donald Trump became the first American president to meet with the North Korean leader, Kim Jong Un, are the variations on the same deal. In this talk, Amb Joseph Yun will examine the current standoff between the US and DPRK and assess whether a genuine improvement of the relations is possible.