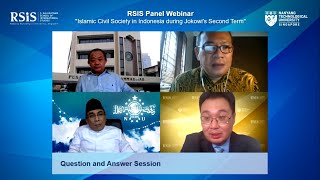 An important factor in President Joko Widodo (‘Jokowi’) successful re-election last year was his alliance with moderate Islamic civil society organisations, particularly with Nahdlatul Ulama (NU) – Indonesia’s largest Muslim organisation. However, since Jokowi’s second term began in October 2019, political friction has developed between his administration, NU, and Muhammadiyah – the country’s second largest Islamic organisation. These frictions had erupted for several reasons, including Jokowi’s decision to appoint a retired general as Minister of Religious Affairs instead of a senior cleric from either NU or Muhammadiyah. Another disagreement between the administration and these groups has developed with regard to the introduction of the Pancasila Ideology Guidance Bill – which has resurrected the age-old debate over the nation’s official ideology and the role of religion in Indonesian politics and society.

In this webinar, we invite three speakers to discuss these issues and other ongoing developments concerning the relationship between Islamic civil society organisations and the Jokowi administration. Professor Mu’ti and Kyai Staquf will speak on the relationship between Muhammadiyah and Nahdlatul Ulama with the Jokowi administration and present the latest updates on the organisational dynamics within their respective organisations. Meanwhile, Dr Lanti will speak regarding the security implications of growing conservative Islamism within the Indonesian society.

In their presentations, the speakers will address the following questions: What are the sources of the ongoing tensions between the Jokowi administration, NU, and Muhammadiyah? How do they affect the long-term relationship between these organisations and the Jokowi administration? How does NU and Muhammadiyah deal with increasing competition from newer and more conservative Islamic organisations that increasingly dominate Indonesia’s public sphere? Lastly, what are the potential security implications of the growing conservative Islamism in Indonesia during President Jokowi’s second term?