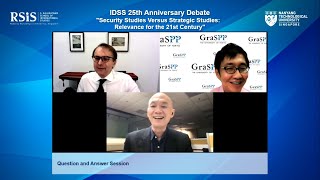 The collapse of the Soviet Union heralded the ending of the Cold War, and subsequently created the widespread belief in a so-called “peace dividend”. The ending of the Cold War arguably also had a significant impact on the academic subject of Strategic Studies, since Strategic Studies had been very closely associated with the study of the strategic nuclear balance between the United States and its erstwhile adversary, the Soviet Union. Given the apparent demise of the strategic nuclear balance, what value could Strategic Studies then have? Instead, intellectual attention then shifted to the subject of Security Studies; with its attention focused on conceptions of security that transcended the narrow focus on military power that characterises Strategic Studies, Security Studies was widely seen in academic circles to provide better clues to the security issues that states would have to address in the post-Cold War world.

This debate, between two thought leaders from the two subjects, seeks to examine the following question: which subject provides policy makers and strategic planners with the better intellectual tools with which to comprehend, and subsequently address, the 21st Century security challenges facing states like Singapore.