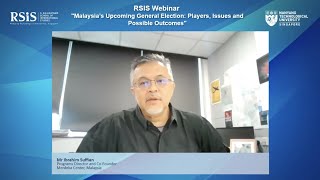 Malaysia’s 15th General Election (GE15) is scheduled for 19 November 2022. Three main coalitions, viz. Barisan Nasional (BN), Pakatan Harapan (PH), and Perikatan Nasional (PN) will be racing against one another to lead the next government. While the United Malays National Organisation (UMNO) with its coalition, BN, are currently expected to emerge as the largest bloc, they may not have enough seats and coalition partners to form the next government. The likely results are thus unclear, and a hung parliament is plausible.

This GE is taking place in uncharted waters with several new factors. Only three of the 13 states, viz. Pahang, Perlis, and Perak, are holding their state elections concurrently, rather than the usual 12. Around 5.8 million more new and young voters have been added to the electoral roll – a 40 per cent increase from the last general election in 2018. Heavy rains and floods are predicted. All this will influence voter turn-out, a key factor determining results.

Since the last GE in May 2018 and the collapse of the PH government in February 2020, Malaysian politics have been marked by unprecedented swings, fragmentation, and uncertainty, exacerbated by the traumatic health and socioeconomic impacts of Covid-19, from which the Malaysian society and economy are still recovering.

This webinar will explore voter sentiment and their likely participation and decision at the polls. It will also seek to uncover the key issues that would determine the GE results and formation of the next ruling coalition:

Economic concerns, corruption and governance
Race and religion
Party and coalition allegiances and dynamics
Role of East Malaysian voters and parties
Our two speakers will share their data, scholarship and analyses. Please join us for a fascinating discussion.