The APLN Meeting, organised in collaboration with the S. Rajaratnam School of International Studies, Nanyang Technological University, brought together 20 experts from Southeast Asia and beyond, all attending in their private capacities. The discussions focused on the operation and effectiveness of the Southeast Asia Nuclear Weapon Free Zone (SEANWFZ), steps to secure nuclear weapons states’ signatures of the SEANWFZ Protocol, and the implications of the growth of nuclear power in Southeast Asia. This report is a summary of the discussions and key findings of the meeting.

ASEAN was deemed to be visionary in forging the SEANWFZ and its Protocol in 1995. The region’s skilful and pragmatic diplomatic approach was able to take advantage of the post-Cold War environment through the SEANWFZ. The Treaty provides for a protocol of accession by the Nuclear Weapon States (NWS) namely, China, France, Russia, the United Kingdom and the United States. However, no NWS has signed the Protocol to the Treaty. They voiced reservations over their rights and sovereignty over territory, exclusive economic zone and continental shelves defined as “nuclear-weapons free”. Some of the NWS also have reservations over the provision on negative security assurances which are guarantees by the five NWS to refrain from using or threatening to use nuclear weapons against states that have officially renounced nuclear weapons. They want to retain the right to decide unilaterally to abrogate the guarantee in respect of countries judged not to be compliant with their nonproliferation obligations. Some have additional concerns regarding not being able to target non-treaty members’ vessels hiding in the zone, nor being able to use nuclear weapons from within the zone against targets outside the zone, during a conflict.

Twenty years after the ratification of the SEANWFZ, there are now changing strategic and geopolitical equations, new technological developments, rapid economic growth, military modernisation and expanding nuclear arsenals.. In this regard, the geopolitical and security environment today is qualitatively different from that immediately after the end of the Cold War. Hence, in light of the refusal of the NWS to accede to the Protocol, there is a need for the reinforcement of SEANWFZ to be adaptive to recent geopolitical and security issues in the Asia-Pacific and beyond. There is a need to identify which parts of the SEANWFZ and its Protocol can have pragmatic and flexible reinterpretation or may require amendments.

One major problem however is the falling number of nuclear experts in the region. There is a need to train new and young batch of nuclear experts within the defence and foreign ministries who can come up with new ideas. Re-education of the public on nuclear issues is needed to rekindle public interest. One suggested approach was the translation of the Treaty into local languages to ensure that flow of information reaches the general public. Mass and social media should be utilised to disseminate information about SEANWFZ and related nuclear issues. In this regard, it was recommended that members of the APLN could write regular op-ed articles for regional newspapers in Southeast Asia such as the New Straits Times, Bangkok Post, and Jakarta Post, among others.

Another challenge identified was that the SEANWFZ is not among the priority of ASEAN foreign ministers and Senior Officials’ Meeting (SOM). There are no substantive discussions on SEANWFZ which is only reflected in one paragraph of the Chairman’s Statement of the ASEAN Leaders’ Summit. Hence, a key recommendation was to continue to engage ASEAN political leaders and encourage them not to give up on SEANWFZ. There is a need to reiterate that SEANWFZ has been one of the key tangible achievements of ASEAN and part of its regional identity—a region free of nuclear weapons and located adjacent to South and Northeast Asia that have been beset with nuclear proliferation. APLN participants suggested that ASEAN foreign ministers must be urged to constantly raise SEANWFZ and its Protocol whenever they hold discussions with the dialogue partners. It can be done using the context that despite the end of the Cold War, nuclear weapons are still in Asia, threatening all countries amidst growing geopolitical tensions.

Existing regional institutions such as the ASEAN Inter-Parliamentary Assembly and civil society movements interested in nuclear-related issues can be included in the regional discussions on SEANWFZ to seek innovative proposals on how to strengthen its relevance, including the Protocol.

The discussions on SEANWFZ should also highlight the importance of re-affirming a normative framework on nuclear safety, security and safeguards. SEANWFZ is relevant not just for NWS but more importantly for the 10 ASEAN Member States. Apart from prohibiting them to possess and use nuclear weapons, SEANWFZ stipulates guidelines for the ASEAN Member States if they decide to build nuclear power plants to ensure that civilian nuclear energy will be use in a safe, secure and peaceful manner.

Civilian use of nuclear power in ASEAN

Until recently, ASEAN Member States were seen as part of an Asian “nuclear renaissance.” Several ASEAN Member States have been articulating their interest in using nuclear power. Now these programs are uncertain. Vietnam, where planning was most advanced, has cancelled its projects with Russia and Japan due to rising project cost. Indonesia will not consider nuclear power before 2025. Malaysia is not considering construction until at least 2030. Thailand appears to have no plans while the Philippines has announced that it will conduct a feasibility study on the rehabilitation of the Bataan Nuclear Power Plant. Singapore has decided not to consider nuclear power. Nuclear power presents significant challenges such as high capital cost, limited human skills base, lack of public confidence and delicate spent fuel management requirement.

But nuclear power also offers major advantages. For most countries, nuclear energy is the only available option for low-carbon baseload power. As countries look for additional clean sources of power to help mitigate climate change, nuclear power may be included in the energy mix of Southeast Asia in the future. Meanwhile, renewables, which also offer clean energy, currently have major disadvantages such as intermittency/unreliability and high cost.

The decision to build a nuclear power plant is a sovereign, national decision and, consistent with the principle of non-interference of ASEAN, will be made solely by the country concerned. It would be prudent to assume that ASEAN Member States cannot all avoid the possibility of using nuclear power in the future. As the region develops and energy demand grows, there may be no other alternative but to consider nuclear energy in the future. However, the implications of nuclear power generation require coordinated regional approach. Therefore, it is prudent for ASEAN Member States to begin the process of sharing information, best practices and experiences. One panellist stated that the delays in ASEAN nuclear programmes provide ample time to build skills and the governance framework in the region. It was recommended that ASEAN Member States should sign and universalise all safety and security conventions and IAEA regulations in order to strengthen the nuclear 3S (safety, security and safeguards) normative framework in Southeast Asia. Even countries that have no specific plans for nuclear power should participate in the treaties in order to understand and prepare for what will be required. Currently, some ASEAN Member States have not yet signed or ratified important global conventions such as the Convention on Nuclear Safety, Joint Convention on Spent Fuel and Radioactive Waste, and the Convention on Physical Protection of Nuclear Materials and its Amendment.

The decision to use nuclear power should seriously consider public acceptability. It was recommended to expand the regional discussions to include non-governmental stakeholders since current discussions are only among government nuclear experts. The media also need to be further engaged to inform the public. ASEAN Member States also need to enhance human resource development in the nuclear field to increase the number of available nuclear professionals with appropriate skills in the region. As pointed out by one panellist, skills base and strong regulatory system are essential for public and regional confidence.

Regional collaboration on emergency preparedness and response has to be strengthened given that the region is vulnerable to natural hazards that can trigger a nuclear accident. ASEAN Member States should extend their regular field and table-top exercises under the purview of ADMM-Plus to include all types of disasters such as nuclear accidents. The ASEAN Network of Regulatory Bodies on Atomic Energy (ASEANTOM), in collaboration with the European Commission-Joint Research Centre and the IAEA, has been preparing mechanisms and activities that will strengthen nuclear emergency preparedness and response in the region.

The creation of a much wider Asia-Pacific Nuclear Energy Community should be further explored. The community can facilitate policy coordination in the region with regard to the enhancement of nuclear safety, security and safeguards in the Asia-Pacific. There is a need to emphasise the importance of interdependence in using nuclear power in the region. In this regard, one proposal is the creation of a consortium of countries in the region that will jointly build, operate, and manage nuclear power plants to ensure that safety and security standards are strictly observed. 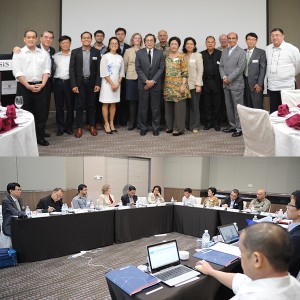